This page presents photos of some of the tenter remains evident today, and adds a little more detail to some examples. It also briefly presents the result of a survey of 6-inch to the mile OS maps from the 1840s and 1850s maps for Lancashire and the West Riding that show the locations of tenters, and whether there is any evidence today of their former presence.

Tenters were depicted on the mid-nineteenth century First Edition six inches to the mile Ordnance Survey (OS) maps of Lancashire and the West Riding. Each sheet was 24 square miles (6 x 4 miles). The West Riding six inch OS surveys took place in 1844-54, and within Lancashire in the period 1842-49. A review was undertaken to determine the British National Grid references of tenters marked on sheets of the woollen industry districts. A 'site' was defined as tenters in an individual enclosure, which may have single or multiple seams. Tenters in adjacent enclosures were classed and counted as separate sites.

For each site, the modern terrain was determined by inspection of satellite images and classed as built-over, pasture/meadow, woodland, parks etc. Any evidence of tenter remains, principally tenter-banks usually evident as single or parallel lines that corresponded to the tenters marked on the First Edition maps, was visited, photographed and superficially surveyed.

Sixty-six sheets were reviewed, encompassing the area due south and west from the Harrogate/Knaresborugh sheet (154) to the Riding boundary. This area encompassed the principal yarn and cloth manufacturing area of the Riding. A total of 312 tenter sites were noted on 19 sheets; the largest number of sites on a single sheet was 60 (sheet 232: north Dewsbury). Many of the sites shown within fields on the First Edition six inch maps are now covered by housing and industrial developments, however 78 former tenter sites (25 per cent) are currently pasture, garden, park, allotments or scrub and were amenable to survey by satellite for remains. Only six sites showed linear features that matched some or all of the seams shown on the historical mapping.

Seventy-three sheets were reviewed in the north and east of the historical county, having excluded those to the due west and south from sheet 54 (Ribchester), principally the plains of the former moss areas. Seventy-one sites were noted, 30 of which had not been built over. Six of these showed satellite evidence of tenter-bank remains.

On the evidence of six-inch OS mapping from the 1840s and 1850s in the two counties, only 12 (3%) of the 383 tenter sites had evidence from aerial imaging of tenters identified as parallel or single lines reflecting the map evidence. On the ground, there were no standing or delapidated tenter structural remains. Even in these 12, tenter-banks were difficult to identify at ground level in some cases. Of the total tenter sites shown on the mapping, 72% had been covered by the built environment.

Examples of associated mills and tenters 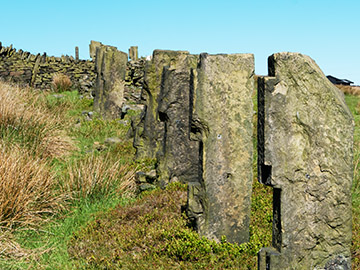 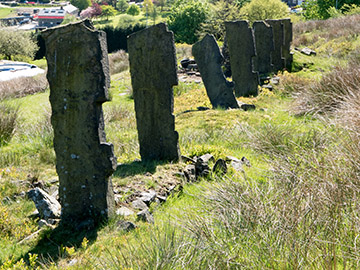 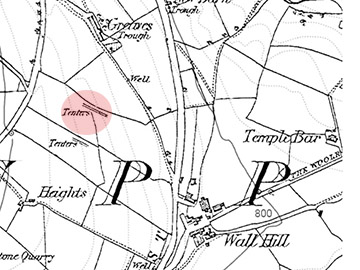 These are remarkable remains of stone tenter posts near Wall Hill, Dobcross. The notch at the top would hold the fixed upper bar of tenterhooks, the extended notch below housed the mobile lower bar to adjust the width. The posts were marked on the mid-nineteenth six-inch OS map (shaded red). The single set of tenters to the south have gone.

Local poet and historian Ammon Wrigley wrote in 1940: 'c. 1840. Stone Tenter Posts erected at Wall Hill. Height 6 feet. Weight about one ton each. Probably one of the most remarkable outdoor industrial relics in England. Greaves and Cooper, flannel manufacturers, Wallhill' (Ref.1). Mike Buckley from the Saddleworth Historical Society advised that: 'Trade directories show that Robert Greaves of Wall Hill was in business as a flannel manufacturer from the 1830s to 1860s and there were a James Cooper and a Robert Whitehead Cooper, both of Wallhill, in business at the same time; James also a flannel manufacturer. However the directories give no indication of a partnership' (personal communication).

Genealogist Jane Sheehan undertook further research on my behalf: a Robert Greaves, woollen weaver, is listed in the 1841 census in Wall Hill. James Cooper and Robert Cooper were both found in the 1841 census returns living at Wall Hill and both working as clothiers. Two Coopers are listed the 1822 Baines History and Directory, West Riding (p. 262 Saddleworth), under the trade heading 'Woollen Cloth Manufacturer' (but not Robert Greaves) - Robert Whitehead Cooper, Wall Hill and Joseph Cooper, Wall Hill. In 1834 Pigot’s Directory (p. 906 Saddleworth) under the trade heading 'Woollen Cloth Manufacturers' there are two individuals with the surname Cooper and nothing for Greaves. The two Cooper woollen cloth manufacturers listed are not classed as merchants - James Cooper, Wall Hill and Robert Whitehead Cooper, Wall Hill. There was no listing of a Robert Greaves or the Coopers at the Greaves and Heights farms/cottages close to the tenters in the 1842 and 1851 censuses (but a Thomas Greaves, labourer, was at Greaves in 1851, brother-in-law to the Head and his wife, Jonathan (and Mary) Bradbury, woollen manufacturer).

The Yorkshire Archaeological Society Journal has a short article on the tenters (Ref. 2).

The mill was near Rakewood, Rochdale. The tenters were still present on the 1891 survey (six-inch map) but not shown on the 1904 revision; the mill was marked as 'disused' on this map. 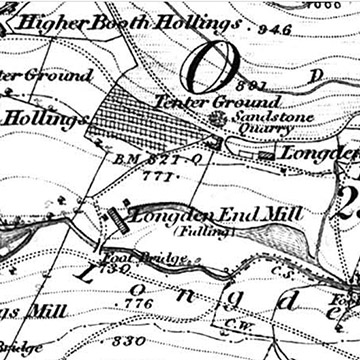 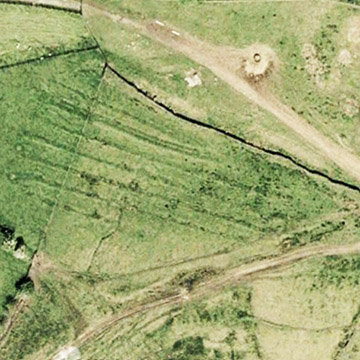 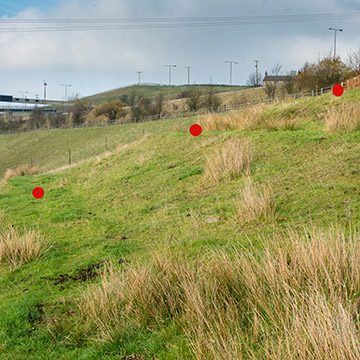 In the 1851 census, a James Clegg was at 'Longdenend' and was a 'fulling miller employing 11 hands' (he had six sons, five of whom were 'fulling millers'. 'Longdenend Mill' was occupied by Thomas Denton (carter), his wife, a coal miner, and a woollen piecer. For sale in 1871 (Rochdale Observer, 23 Dec 1871), the mill had a steam engine, steam boiler, water wheel, five rows of double tenters, four single, drying 'stone' [stove?] with eighteen lengths and six lengths tenters inside. In 1891, Longden End was occupied by a John Leach and family, described in a 1891 trade directory (Cotton Spinners & Manufacturers Directory), as a 'finisher of all classes of woolen and angola shirtings, white goods etc.' In June 1894 he was fined £5 for polluting a stream that fed the river Roach and told the court that he was fitting tanks and filter beds to tackle the problem. (Manchester Courier and Lancashire General Advertiser, 7 Apr 1894). The mill was destroyed by fire in 1906; at the time it was owned by Messrs. Whitworth, woollen cloth finishers (Cotton Factory Times, 27 Apr 1906). There are currently just a few stones at the mill site, but the reservoir/filter beds are still evident.

The mill was at the hamlet Lydgate near Littleborough on the old packhorse route from Rochdale to the Halifax area. In 1851 the locale was occupied by two families, the Holdens and the Kershaws, mainly woollen workers - fullers, carders, piecers, spinners and weavers, and a third family not associated with the industry, the Butterworths. In 1861, the heads of three families were all fullers, with the head William Rothwell employing 8 men and 2 boys. In 1871 the breadwinners were again all fullers/millers. In Jan. 1883 the London Gazette published proceeedings for liquidation instituted by William Spencer and Charles Rigg of the Oil Mill. The dominance of fullers in the families continued up until 1901/1911 when some were working in the cotton industry. The 1891 25-inch OS map shows tenters closely associated with the mill, but the tenters shown in the 1840s are not evident. In 1909, the mill is marked as 'Disused'. The 1891 map shows a Lydgate Mill also in the hamlet, with it own tenter-fields. It was owned by Alfred and William Law, flannel manufacturers, who also had a mill in Littleborough. Although not shown on the 1840s map, it must have been built shortly after because in 1858 a partnership of Law and Fletcher of that mill was dissolved (London Evening Standard, 13 Feb 1858). 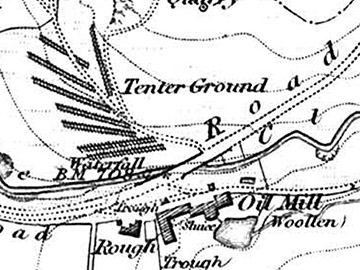 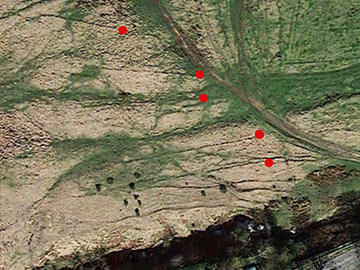 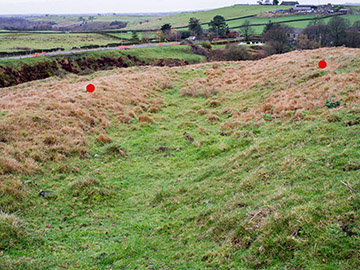 The magnificent mill is Oats Royd Mill, Luddenden, Upper Calderdale, a former worsted mill, now dwellings. The business was founded by John Murgatroyd, worsted spinner, in the 1700s. The mill dates from 1847, but closed in 1983 (Ref. 3). Worsted was not normally fulled, and this mill is not the focus of our attention on tenters.

Less noticeable at the bottom of the image are very faint tenter-banks in a field. The red circles are on the left end of the racks, which extend to the right. These tenters are marked on the 1914 25-inch OS map (below), just south-west of Peel House Mills, the mill marked as 'Woollen'. The tenters are the parallel lines to the right of centre. The owners/tenants undoubtedly erected the tenters. There is a interesting photograph of the mill and its tenters, but I have been unable to contact the owner and so cannot show it. However a copy is on Malcom Bull's Calderdale Companion so click here to view the photo. Note the building (shed) in the tenter field, probably a wet-house (storing cloth in inclement weather). In 1925 when up for sale it was described as a 'blanket manufacturing plant', and two Whiteley tentering machines were available (Yorkshire Post and Leeds Intelligencer, 13 Jun 1925). At times in its history, it also functioned as a worsted mill. The mill today is a ruin.

As an aside, the author Whiteley Turner who wrote the wonderful book A Spring-Time Saunter: Round and About Brontë Land was sent to work in Peel House Mills when aged eight. The book recounts his walk from Mount Tabor (Luddenden) to Haworth and back in 1905; he chatted to local country people, including women who knew some of the Brontës in their childhood. When aged 13, his arm was torn off by a carding machine at a different mill (Halifax Evening Courier, 21 Feb 1921). 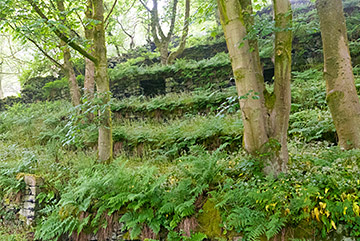 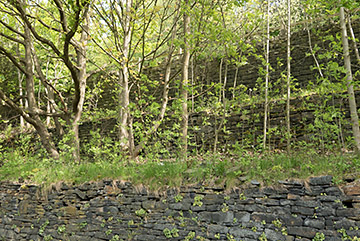 These terraces were probably used for tenters. Left - terraces behind the remains of Beverley End, a ruined weaver's cottage associated with Jumble Hole Clough, a steep former industrial valley with a number of mills (between Todmorden and Hebden Bridge). Interestingly, the dark rectangle is a bee bole (to hold bee skeps or wooden hives), one of twelve. Right - terraces between Hollins Mill Lane, Warley, Sowerby Bridge and the elevated Rochdale Canal hidden at the top of the photo. A survey and and local knowledge suggest the platforms were associated with the textile industry, dated to the end of the eighteenth century.

This section presents larger copies of some of the key images (click to enlarge), and images of other tenters (and supposed tenters) not shown elsewhere.